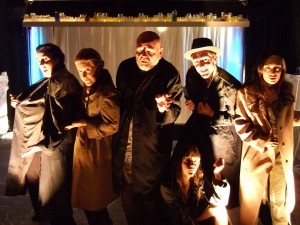 What is more glorious than television?  video-games?  The internet?  movies?

Looking you in the eye when they do it.

All the while pretending to be people they are not.

The theater is perhaps the most embodied example of the magically real, where you go to a funny place that is not your house, and is not a movie theater, but some strange interim space, that is private and public, secret and sacred, funny and scary, exciting and uncomfortable.  Because the things you see are tangible, and if they are fake, they are at the same time, real also, in the sense that they are really there. You are told by somebody not to touch the shoes on the set.  Because they have lights in them.  Footlights. Haha!

And the people that you are looking at in this theater look back, see you, register you are there, and the characters you are looking at are being played by people like you, who can do things you can’t, and unlike the movies, you are seeing them do these things RIGHT now right in front of you, like a magic show.  In that sense, theater is the ultimate magic trick.

Son of Semele‘s production of Stephanie Fleishmann’s play WHAT THE MOON SAW OR I ONLY APPEAR TO BE DEAD uses the most magical of stories — the fairy-tale — in order to mesh history and fantasy, high-style postmodern acting and vaudeville style-props and silhouettes, accordion playing and lyrical monologues, the lighting of real matches with puppet iguanas.  Hans Christian Andersen and the real names of people who died in the 09/11 attacks.

If you are in the Los Angeles area, you have til October 9th to experience this intimate, strange, intense, heart-breaking, often whimsical, and — in the end — oddly comforting performance.