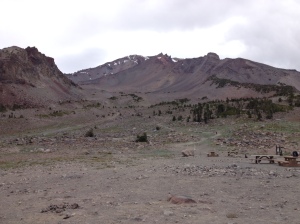 There’s a vortex there she said they said. Someone spoke at a ridiculous dinner where she wasn’t sure whether the main teller was the wife or the daughter of the man who first said the thing about Mount Shasta. Vortex she told me she told them – the daughter/wife and the man — I don’t believe in that shit. But the man did and the daughter (it turned out it was his daughter) did and when she told me about the conversation we looked it all up online and yup there is a vortex there supposedly. It’s one of several power centers, our visitor said when we asked him about it, when he arrived from hanging with the Radical Fairies and the Reclaimed Witches. But don’t bring crystals or herbs. Don’t bring anything. Bring a purity of intention. I don’t even know what that means I told him, but we went to Mount Shasta anyway.

We went just today. We couldn’t help it. We wanted to know about the vortex and the healing and we were hoping for some sort of power – any kind, but good. Any sort of power that could heal what’s going on: the broken airplanes and the broken ferry, the broken countries and the broken borders, the broken water and the broken everything. We drove past so much drought that the cracked land made us thirsty and we drank all the water in the car and then we bought more and we wondered how long before the water runs out? How long before everything runs out? We aren’t paying attention enough. We aren’t. And soon quite soon it will be too late. But it’s not too late yet. So we went to Shasta, out of a kind of desperation, although in truth we weren’t and aren’t desperate yet either. I think you know it when you feel it. We watched The Mummy on TV last night and it was oddly sexual and strange, and this morning we sat under moose heads in a gigantic restaurant eating stale soft bagels where everyone was speaking some Eastern European language, and then standing outside in the parking lot in 2 lines to hug everyone afterwards. There was one man amongst the lines – one man wearing a yarmulke – and I said to my man, do you see that guy? Yes, he said. I see him. Then we drove. We drove to find breakfast but the places were all too crowded, so we drove some more. On the street corner of downtown Shasta a white boy stood with a hand painted sign and he showed it to all the cars. It said PRAY FOR PEACE IN JERUSALEM, and I put my palms together at the boy and then I gave him the thumbs up. He’s not one of us, he said to me – my man, the driver — and I said it doesn’t matter, and then he said would you have lunch with him? Would you invite him to lunch with us? And I said I don’t know but I will certainly pray with him. And then we drove up the long road to the mountain. It was all pretty trees, and then scraggly trees, the little trees trying to find root in the rocks, and then we were above the tree line and it was all rocks and dirt and station wagons and a girl standing in a loose white shirt balancing on some ledge above us.

There were more Russian people there and bored Americans with ponytails speaking on cell phones. And then a group of 5 people with backpacks – 2 boys, 1 man and 2 women, and I listened to them talk. Lo said the woman, lo. And I smiled at the woman with the big camera and the biggest backpack. Hi she said in English, and I heard them speak the language I heard in Jerusalem 4 months ago, and my man asked me where are they from and I said where do you think? And he said you know this for sure? and I said yes and he said should I ask them if they would like me to take their picture. I nodded, and he did, and the 5 posed and sang a song that we used to know in the language we cannot speak but that is our language – the tongue of our origins – and then we drove down the mountain. The boy was reading the bible and still holding the sign, and we sat on metal chairs in a restaurant by a river and ate burritos.

Did you feel anything? my man said to me. I didn’t know what to answer, because what I felt was the people – not the emptiness – the people hugging in lines in the parking lot and the boy with his bible and the 5 with their backpacks and I was thinking it can be like this sometimes. Sometimes it can be harmonious and strange and beautiful just like this. It could be like this, I think. All the time.