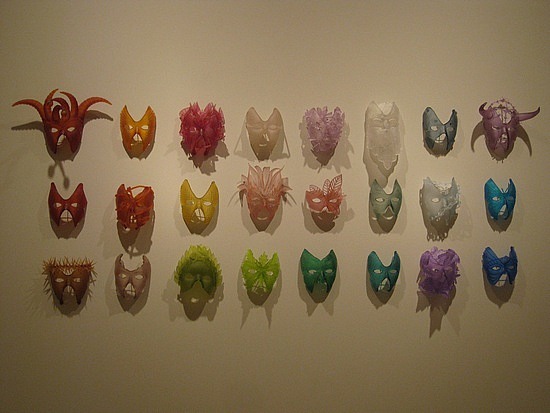 Maccabee and Maccabee are a father and daughter team that make and wear magical masks.  Monsters and mermaids.   The sun. The moon. Animals and objects that have never been.   Philosophical concepts like phenomena and noumena.  The categorical imperative and the will to power.

Maccabee masks give faces to the impossible.

It started when they played pretend in their house in Monjoi Mississippi.  The father, Sebastian Maccabee, was home sick from the advertising business because he’d caught the mumps from his daughter, little Serenade Maccabee.  They sat in their pajamas and played Parcheesi til they got bored and started putting on costumes and becoming other people.  Maccabee Père hulked in a backwards suit jacket with a Frankenstein face made of candle wax melted over a large manila envelope.  The little daughter, Maccabee Fille, stood in front of him, diminutive but threatening in her quilted bathrobe and paper-bag face.  The face of a lion.  Tangles of brown twine radiated from the bag, and the staples clicked threateningly.

“Let’s make it scary scary,” she growled at him.

Maccabee and Maccabee soon went to work full time in a workshop on the roof covered by mosquito netting so you could see the stars.  They started with easy materials like cardboard, glitter, and glue, but quickly moved up to tin foil, wood, and papier-mâché.  Then it was on to metals – the father torquing the gold and silver over the bonfire in the middle of the roof-room-lab, the daughter working it quickly with the delicate instruments as the metal hardened.

Every weekday, the secretary from the advertising firm would arrive with papers for Mr. Maccabee to sign, and a special teacher would appear from the school to tutor Miss Maccabee in French and Math and all the basics, while the father and daughter worked away on their masks.

Visiting the studio was always exciting, because the process of arriving was complex and many-faceted.

Callers and would be clients would approach the townhouse entrance that was flanked by giant life-size Buddhas.

“Let me pass, enlightened ones,” they would say, and the Buddhas would lift their heavy wooden arms, and an elevator with a refrigerator door would open with that liquid rubberized sound.  Stepping inside, the visitors were propelled on a roller coaster ride out and around the building, and then suddenly found themselves swung inside through the kitchen window, underneath the stairs and up til the door flew open and they saw the sky through the mosquito nets.  Sparks flew from the welding tools, and Maccabee and Maccabee would flip up their protective gear and gaze, searchingly, at the faces of the newcomers.

The mother and wife, Mme. Nathalia Maccabee was a famous opera singer, and for many years, had displayed a singular disinterest in the other two’s creative schemes.  She traveled constantly on her sold out world tours, only deigning to take the occasional Polaroid of the daughter and the father in their latest creations.

But, one day Mme. Maccabee returned with a great gift; she had studied glass blowing in Turin when she came down with a sore throat and couldn’t sing.  Now she taught her husband and daughter how to fabricate brilliantly colored masks of glass.  Then she retired to the downstairs apartment to cure her cold.

These new masks were special even by the family’s high standards, for when you wore a certified authentic Maccabee mask of glass, your real face could be still seen, the natural part of you melding with the artificial.  Sparked with glittering filaments, the Turin glass softened with the heat of your skin, and would stretch and move with your slightest expression.  Thus, the Maccabee masks of glass would change constantly, even as you wore them.   In the daylight your face would glow strangely, and at night the colors made all manner of curious shapes traveling across the visage of the wearer, causing passersby to gaze in wonder, seeing at moments, an unusual kind of fish, an engine or a system of planets traveling across cheekbones, lingering on foreheads, and dangling at the chin.

Politicians, popes, and pop stars came to buy the masks of glass.  But Maccabee and Maccabee worried about the power of these masks and so they gave their potential customers complicated and mysterious tests combining feats of strength (like lifting heavy laundry baskets) with questions pertaining to the sound of rain when it falls on a puddle in front of a calico cat.

Many failed the tests.  But some passed.  Felix da Housecat, Annie Lennox, and the Gandhis (another father and daughter pair), were some of Maccabee and Maccabee’s first glass mask customers.  Later owners included the ashen-faced sad dancers of Sankai Juku, and other artists who have asked to remain anonymous so as to keep the mystery of the masks their particular secret.

If you visit Monjoi at night, you will perceive the bonfire on the roof of the old building.  If you speak to the Buddhas and take the ride, you will emerge under the star-studded mosquito netting.

Come closer, and you will spy the family.  You’ll near the aging father, Sebastian still torquing the silver.  Now — stand next to Serenade as she carefully blows the glass.  Then watch for the moment when your own secret visage bubbles out and hardens  —emerging from the union of heat and sand.  In that instant you will face the impossible.

You find that it becomes you.