A friend of a friend told me that you guys never watched the final episodes of BSG!  I can’t believe you did that!  What the heck made you stop watching? 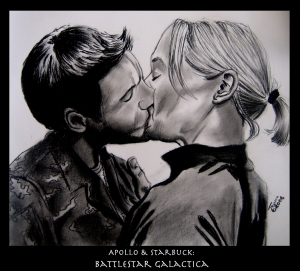 Last things first:  Magically Real special guest Lillian Behrendt. and I did indeed view the concluding half-season of BSG during the past couple of weeks — culminating in a kitchen viewing of the last 5 eps in a veritable maelstrom of macaroni and cheese, red wine, and chocolate last night.

I only wish I had many more bottles of wine to numb the agony of watching the demise of this series.

We groaned over the many false steps — steps that reduced the fascinating possibilities of the first 2 seasons down to their most essentialist, heteronormative, white-privileg-y, options — neutralizing the critique of the post-colonial, the interrogation of what constitutes “terror”, the complex view of identity, etc. etc.

Lillian B and I discussed and identified several crucial missteps:

2. the pregnancy and miscarriage of Caprica 6.

3. making Anders into another hybrid.

4. Cavill’s sudden and (completely) unmotivated suicide (Lillian saw it, while I slurped some wine, and I insisted she backtrack so I could see that particular piece of idiocy myself).

5. disappearing the ([un?]dead) Starbuck with a veritable puff of smoke at the end.

6. the killing of Boomer and Tory and Dee (another unmotivated suicide), and Cat and all significant women of color other than Athena.

7. the entire handling of the settling of the new “earth” (aka earth #two, dos, zwei, etc) including but not limited to:

a.no kids shown other than Hera.

b. where’s the Chief? (Lillian said that part was cut but he was supposed to end up in Scotland [?])

c. the refusal of any technology (Hello! Rousseau reminds us there is no return to the state of nature… didn’t the writers get that memo?).

d.  dispersal into couples and pairs, rather than clans or larger communities that could actually sustain agriculture  (Even Clan of the Cave Bear gets this one right).

e. the disdainful ‘gaze’ of the predominantly white male survivors on the first (black) humans.  Their plan to mate with and therefore ‘colonize’ them. This was Lillian B’s remark and it is a particularly shameful and problematic moment in the series.

f. The reduction of the ethical/political conflict to the Frankensteinian (Lillian B’s point), angst about technology (a la the Terminator movies, which actually address this question more interestingly).  This is NOT what this new iteration of the show has been about.  At its best, BSG explored questions that opened up exciting possibilities for sex, collective bargaining, belief, tolerance, and dare we say it? peace.

We could go on for pages talking about what went wrong with the series.  But we won’t.

Now, to answer your first question:  We had stopped watching originally shortly after the return of Ellen, when it became clear that somehow the Cylons were from “earth.” That and the curious resurrection of Starbuck — who must now contain a mind-numbing set of soap opera cliches: child abuse by her mother, mother dying of cancer, painting, music, as well as abandonment by the piano-playing father (cue Billy Joel here) — felt so false to us that we couldn’t continue.

We turn away from these antics with hope towards the work of women writers pursuing new identities and possibilities for sf and fantasy.  I believe that I mentioned that I had the pleasure of meeting and speaking at length with the late Octavia Butler, as she was putting the finishing touches on The Parable of the Sower.  Butler’s Xenogenesis series is even more radical in terms of its understanding of gender, race and what it even means to be “alive.”

On the heels of  Butler come some truly interesting folks.  At a recent Eaton Conference, I met Nalo Hopkinson, whose brave YA novel The Chaos, I have reviewed here. 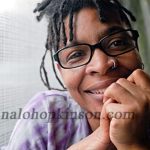 I will also share my memory of a brief conversation with the author Karen Tei Yamashita and her sister (whose name, I am embarrassed to say, I have forgotten).  When I mentioned BSG to Karen, her sister looked at her inquiringly while Karen explained the “Athena” and “Boomer” characters to her.  I remember Karen saying something to the effect that both of these Southeast Asian female characters had white, male Caucasian partners.

Let’s put it this way — I don’t remember their being too impressed with that story line.

I would like to add to my list the work of  Catilin Kiernan as ground-breaking, anti-essentialist, and just plain (or not so plain) interesting.

Clearly, it’s time for better stories.  And we at Magically Real believe that we not only need them, but actually, deserve them.

So let’s get reading, writing, and making films/tv shows/web shows worthy of “us.”