A story about what gets thrown out.

Once upon a time there were a pair of gloves, a green German hat, and a rocket.  They met in the dumpster at the corner of Rosewood and Fairfax, where the homeless lady in the miniskirt and the unzipped Prada boots liked to rummage. But she had so much to drink the other day that she did not see them.

The gloves were white leather with pearl buttons, flowing long and lean into what is known as opera or elbow length.

The hat belonged to a little boy or else someone with a very small head.  It might have had a feather once.  But just now, didn’t.

The rocket was a real rocket:  red, shiny and a little bit scary saying NASA 2 on it.  How it had appeared in the dumpster was a subject of great speculation among the newspapers, recyclables falsely placed in the garbage, the vacuum cleaner bags, who were always particularly chatty, and the two empty bottles of Veuve Cliquot champagne.

“However did you end up here with us?” asked the gloves at last, clasping right and left together with excitement.  She had read in Emily Post that sometimes you have to pose a direct question in order to get a party going.

“I came here because I am a conscientious objector,” said the rocket.  “I was a tiny resistant cog in a big uncomplaining machine.”

“But isn’t objecting awfully difficult?” asked the gloves, who had—after some consideration—decided to go missing from a gala ball because of the use of non-union workers to pour the champagne. .

The rocket could see he was among friends.

“Well, I told the missile launcher no, but he wouldn’t believe it.  I told the buttons on the control board no, but they ignored me.  I went all the way to the mainframe and said I would prefer not to participate.  I and a few others then had ourselves detected defective.”

The company gasped with admiration at these bold, electronic steps.

“But there is a price for such rebellion.  I got thrown out and the daughter of the janitor got me pulled out of that dumpster on a dare.  I traveled in a souped-up cadillac all the way out here.  I kept on worrying I might go off by accident, or might get sold to a disenchanted corporate mogul.”

There was a pause and then:

“You see, I can work just fine,” he said somewhat roguishly.  “I just don’t want to kill anybody.”   Everyone nodded.

“That is very admirable,” said the German hat, who had been listening wistfully to the rocket’s narration.

“I, on the other hand, am only a bystander.  I was the first child’s cap of a boy who joined the Hitler Youth. He joined because his father and mother told him to; he did not know what he was doing, and perhaps he never knew or understood until it was too late.  All I could do was hang from the doorknob and watch him go to the meetings and Actions.  Each time he came back he was harder and more metallic.  In the end, he was as hard and strong as iron.  And as empty.  But I stuck fast to the doorknob anyway — hoping he’d remember himself and the child he used to be.”

The rocket and the gloves became tense, for this would be – they knew  — a tale with a difficult ending.

“Did he?” they asked in unison.

“Well, no – and yes.  After the war, he came to LA to make movies, thinking no one would recognize him from the SS fuer Jugend training films—for which he was the poster boy and star.  And they didn’t.  But it was a terrible secret to keep, and in the end he had noone but me  — his first hat – to talk to  til he died and the County people came and threw away his things.  ‘You remind me of the mountains and of dachshunds’ he would say to me.”

The German hat sighed.  “He was such a sad man.  It is terrible not to know what you are doing.  Or why.”

The rocket and the hat were comforted by this, although they also trembled, for as they were speaking, the garbage trucks rumbled into action, backfiring in the early morning like a set of distant guns. 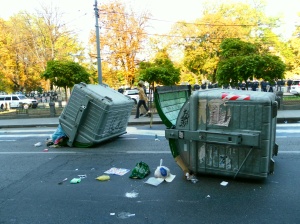