Once upon a time there was a woman who wanted to be a writer.

She wanted to write poems when she was a girl. So she learned how to read and write letters, and wrote one, that is to say, a poem, but her parents didn’t like it because they were afraid because you never know what words could do. The adults the girl knew were all afraid of words and she became afraid for them, so that then they could finally stop being afraid. Although they didn’t. This is called Trying to Fix Something that Can’t Be Fixed or Post World War 2 Political Anxiety. Next, she thought she would SAY words out loud in front of a group of people called an Audience, and she would wear a wig and talk funny, and adults liked this better, and the words didn’t scare them, but the fact of something called an Audition did, and then came the fear — not of words — but of money. As in not having any. This is called the Recession Before the Great Recession (or possibly it was 2-3 Recessions before the Great One).  So the girl, who at this point, was close to being a woman said “Screw it, I’ll TELL people about words and do that for cold hard cash.” Bingo. That’s what she did. Her parents didn’t like this either, and neither did alot of people that she knew, but she couldn’t give up words altogether. So she told people about words for a long long time. These people are called Students.

One day a student told the woman “I am a poet.” She looked at her. “I’m a novelist,” said another student. “I think novels are dumb,” said another, “so I write comics and make movies.”

This is called Students Have More Guts than the Teacher.

Now a former student, a current student, a possible future student and several friends said “All this writing is fine, but how about joining me in a writing race where everybody who finishes gets a blue ribbon and a pat on the back and has a big big story that is maybe crap but maybe has something, and you’re part of this whole like word movement.”

The woman said “ok”. The woman wrote alot at the beginning, and then less. She got very sick and puked alot, but she finished.

Alot of the big big story was pretty bad. But some of it was interesting and a couple of moments were pretty good.

Because after all, the woman realized,  you never know what words can do. 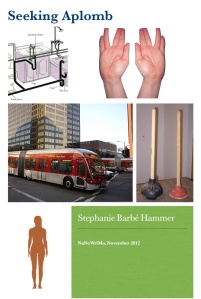