Dear friends — this is a snippet of a possible memoir called My Romanovs.  Appropriate for all ages.

Mr. and Mrs. Rogers were very wealthy New Yorkers who were friends with my Romanovs, that is to say — my grandfather Vladimir and my grandmother Stephanya. Mr. Rogers was tall and kindly and laid back in that way very rich people from old, well to do families are; since they don’t have to prove anything to anybody they can afford to be extremely kind and benevolent – which he always was. Mrs. Rogers, on the other hand, was an absolutely terrifying woman in a wheelchair who wore big jewelry and turbans. She chain-smoked and spoke in a very deep loud voice. She had been crippled by polio and my grandfather, who was a dress designer, made all her dresses specially, so they would be backless or have a slit up the back so she could very easily to go the bathroom – which if you think about it makes a lot of sense.

My grandparents went over there all the time – there being a penthouse in a hotel on 5th Avenue. They always spent Thanksgiving with the Rogers, which meant that as soon as I was old enough to sit at a fancy dinner table with grownups, my parents and I went there too. You had to get fantastically dressed up, and I generally wore a gorgeous dress that my grandfather made me. The fancy clothes part was sort of fun, but the formality got dull fast, the food was only ok, and there was no one my own age to talk to.

But by far the worst part of these hotel Thanksgiving dinners was the dessert. Thanksgiving was punctuated by the arrival of a glass dish filled with something that looked like ice cream, covered in a bright green sauce. I learned later that this green junk was crème de menthe, and that the ice-cream stuff was lemon sorbet. What a combination.

Every year, I dreaded that Thanksgiving dinner, knowing that the inedible dessert would appear. This was still the era of the clean plate club and I was going to have to dig my way through that ghastly thing. My mother hated it too, and so did my grandmother because they hated anything with alcohol in it, but it never occurred to either of them to say no I don’t want any, thank you. We all three sat there, glaring at the evil anti-treat.

After the travail of the Thanksgiving dinner, we would go out of the hotel dining room and into the Rogers’ penthouse apartment, which had a large garden and you could walk out and be among trees and bushes on top of the city. That part was amazing. 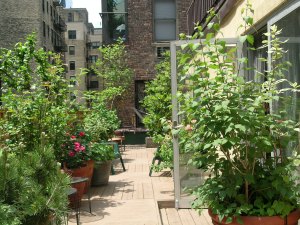 And my family looked so nice. My mother wore black satin, and pale sapphires, and pearls, and my grandmother wore red or orange or something earthy and bright. My mother and my grandmother had matching aquamarine rings, and I loved holding both their hands, and feeling us joined together by the magical stones. My father wore an expensive Brooks Brothers suit, and while my grandfather wore black he always had on a shiny striped ascot with a giant pearl stuck through it. He also sported a huge turquoise ring that he’d gotten in New Mexico. Sometimes I see pictures of Salvador Dali, and there’s something in the maniacal humor of that artist that reminds me of my grandfather.

I didn’t understand the talking at the party but I liked being with my grandparents, whom everyone knew and admired, and if there was someone foreign at the gathering, my grandmother could speak with them, because she knew many languages, and was never afraid to speak them.

Mrs. Rogers loved my grandfather and depended on him for many things. She would telephone him to come to the penthouse and help her with some last minute arrangement: organize the flower arrangements, or sort out who would sit where and what they should all talk about.

Once in the middle of Thanksgiving dinner, I saw my grandfather squinting disapprovingly at our hostess. He got up and stood behind Mrs. Rogers at the head of the table. She was about to light her cigarette, when he grabbed her turban and forced it sideways on her head, and then grasped her shoulders, and pulled her shoulders down, and yanked her dress sleeves up and out.

I was sure she would yell at him with her deep smoky voice. Instead she looked at him, as he told her “It was all wrong but now, I’ve fixed it.”

“Thank you, Prince,” she said and turned to me.

“Your grandfather is a genius, little Stephanie,” she said. “Did you know that?”

My mother looked at me.

“My mother and grandmother don’t want any either,” I explained. “They are teetotalers.”