Dear Magically Real Friends:  I wrote “Sock Legends” several years ago on an Easter morning that also coincided with Passover. It continues to be one my favorite stories, and I will keep on reprinting and reposting it, until it’s no longer needed.  Please read and share.  (appropriate for everyone)

Once upon a time there was a little sock that lived in a sock drawer along with T-shirts and underpants in a blue dresser in somebody’s room. The sock had lost its twin long ago and, having no sibling to talk to, spent most of his time in the darkness of the drawer, listening to the other socks discuss the matters of the day.

A pressing issue among the sock population had become how the world was made and organized. The socks talked endlessly and sometimes so vehemently about this question that the drawer handles rattled and the T-shirts and underpants had to knock on the bottom and top of the drawer to ensure a little peace and quiet.

“Those socks need to learn how to get along,“ said the T-shirts to each other.

“That’s because there are so many of them,” said the long johns, who had gotten thrown in the underpants drawer by mistake.

“And because they have to split apart to get washed and then get put back together, they get all manners of crazy ideas. It’s that constant movement or partition and reunification that makes them a bit unhinged.”

“Well, don’t you know everything?” said an aggravated pair of Hanes all-cotton. He was very annoyed that the long johns were pressing in on him, making doing what he liked to do best—spread out, letting his fibers breathe—difficult.

But it was certainly true that the socks argued a great deal about credos and creeds.

One corner of the drawer favored the theory of a One Sock Above All Others, who created sockdom, underpantsdom, and T-shirtdom. The OSAAO had decided that the socks were the chosen garments, perhaps because of their duality, and gave them special laws of conduct. Thus it was believed, according to this segment of the sock population, that the original socks had been created in a sort of divine factory by the OSAAO. The first socks were then forced to leave and travel—just how, no one knew—to the sock drawer itself. 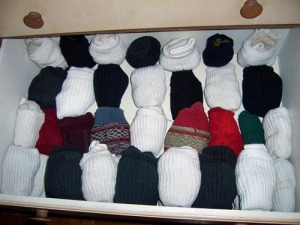 The little sock listened to the stories of wandering and exile, of the attempt to create order out of the chaos of a drawer, and of the need for laws: All knee-highs together at the front; all crew socks at the back and pastels in the middle.

Orphaned socks, like our little sock here, were to be placed near the front but not quite, so they could wait and hope for the coming of their long-lost twin. Only then could they go out into the world like the other socks, who did (it must be admitted) exit the drawer from time to time.

Another group of socks fervently disagreed. These were the socks that lived at the opposite corner of the drawer. They maintained that yes, of course there was an Original Sock Creator, but there had been, and would be again, a Son of Sock, who taught that love was more important than rules and that believing was more important than doing. These socks got tangled up with each other and often ended up in a giggly pile that kept on saying how much they loved each other. Sometimes they even rearranged themselves into nonmatching pairs, and out they went in the world and sometimes did not, sad to say, come back at all.

These two groups argued a lot about the law versus emotion, about duty versus inspiration, and, often, the little sock did not understand what in the world they were talking about. Why did one side get so angry? (The chosen sock group.) And why did the other group go from sudden laughter to rage and then to abject tears when anyone disagreed? (The Son of Sock contingent.)

That’s when the third group showed up. The third sock consortium consisted primarily of tightly woven business socks. Adult-looking, they could be beige, argyle, black, brown, or blue, but rarely white, and almost never pastel. They congregated at the very front of the drawer, pushing hard against those who had come before, and they insisted—loudly—that they needed to be stationed there so as to be ready to make the Great Sock Journey. All socks must travel, the new arrivals said, to the place where the famous Sock Soothsayer received his written instructions, dictated directly from the Sock Maker Himself.

A lot of socks didn’t like these newcomers. The new business socks were quite aggressive, and they told the other socks they were stupid if they didn’t agree with them and that they were going to end up in the trash if they didn’t behave. On the other hand, they told wonderful jokes and were big huggers. If they liked you, they would say “SOCK!” and embrace you. After that they were always your friends.

The little sock didn’t know what to think. He had a feeling that believing was important, and he missed his long-lost twin, whom, at this point, he could barely remember. He decided, despite his doubts, to go on the Great Sock Journey, and when the Newcomers jumped into the laundry basket, he hid himself underneath a big argyle sock and jumped too.

Oh, dear! What a mistake, thought the little sock as he found himself immersed in freezing cold water and not in the usual hot of distant memory.

“That’s to protect our colors, foolish little one,” said Argyle haughtily. The little sock got thrown around in the agitating cold water. But along the way he met a kind T-shirt who swept him up in his shoulder.

“Just hang on there, young fella,” said the T-shirt. “I’ll protect you from the worst of the buffeting. Then we go into the driving desert, and we can talk as we spin around.”

And hardly had he spoken when they whirled madly in violent circles and then got tossed into a dry and hot enclosure.

This is like the original Sock Journey some of my people talked about, thought the little sock, and so he spoke to the T-shirt as they settled into a comfortable, warm spin.

“Oh ho,” chortled the T-shirt when he heard about the various sock disputes. “So this is what you all are caterwauling about in that overcrowded drawer of yours.” The T-shirt unfolded its neck so as to better enjoy the warm drying air.

“The difficulty with your view is that it places socks at the veritable center of the universe,” said the T-shirt, extending his arms and allowing the little sock to rest comfortably against the belly of the shirt.

“But it excludes everyone else. What of T-shirts? What of underpants?”

“Gosh,” said the little sock. “I never thought of that.”

The little sock was beginning to feel wonderfully dry, and as he nestled in the smooth cotton of the shirt, he asked his older acquaintance to share some other ways of believing.

The T-shirt—who had clearly spent much time in the great world outside—happily obliged.

“There are views of the universe that there were many makers, not just one, and many helpers, not just a son. Some say there was no maker at all and that the world as we know it—filled with drawers and textiles and water and heat—just happened. A kind of wonderful chance.”

That possibility frightened the little sock a bit. Could there really be no plan at all? He shared his fear with his new friend.

“I think,” said the T-shirt, “you just try to live well, behave kindly to others, and be happy.”

“And my twin?” asked the little sock.

“There, you have a real problem,” said the T-shirt, “and you may indeed decide that a quest beyond the limits of the laundry will be necessary. For that you will need to find a foot, and the foot will take you where you need to go.”

The air grew still. The little sock felt himself pulled out of the space. As he called good-bye the T-shirt called cheerily after him.

The little sock felt himself slipped around something large and fleshy, and he saw himself covering wriggling, wormlike monsters. The monsters waved to him, and he felt himself encasing a being larger than himself but still small.

Is this the Sock Maker? he thought, but no. And, yet, imagine the little sock’s delight when he heard a thunderous voice roar. “Mommy, here’s my missing sock!”

As the little sock looked sideways, he saw his long-lost twin covering a similar set of five monsters.

His twin smiled brightly as, above their heads, the old T-shirt stretched tight across a huge, flat expanse.

And the three sallied forth, searching for their truths. 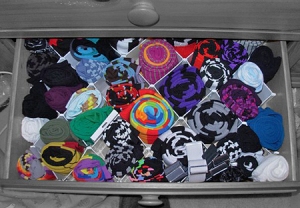