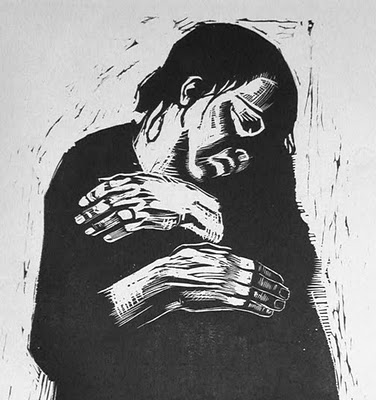 Dear friends of the unreal!

Submitted for your consideration : Art that is public official and institutionally validated. Art that is private, personal, and unauthorized.

In its “new and improved” supersized incarnation MOMA presents the historical trajectory of German Expressionism in 3 enormous galleries – taking us from the beginning of the 20th Century through World War I.  Oh what a brilliant beginning.  Strange off kilter nudes: a woman clad only in violet stockings, drawn from above as though the artist were hanging from a chandelier, unable or else afraid to touch the woman underneath.  A manifesto etched in bold black letters proclaims that any artist interested in genuine emotion “belongs to us.”

And then the war – the terrifying pictures of Otto Dix: so horrifyingly grotesque that the museum visitors (many of whom were German) dashed by the massive wall where the black and white drawings of the dying and the terrified are stacked on top of each other like a PTSD mosaic.

But you could not rush by Käthe Kollwitz.  Her woodcut series WAR presents huddles of figures – black relieved only by the occasional line, the occasional circle indicating the white of the eye.  She shows us the true combatants: parents, children.  “Mothers” shows us densely packed women, embracing while looking with fearful determination in every possible direction, while one child peeks out, alert and searching from beneath the arms of his/her collective maternal circle.

The drastic simplicity of the woodcut —  its roughness, its blockiness —  enables us to see what we can’t access in photographs, life footage or news reports.

I sat on the sleek black bench across from WAR and cried for my Palestinian female student braving the borders to go home, my former student’s military husband who is currently in a bunker in Afghanistan, the man whose head was bashed in at Dodger Stadium.  The things we “know” but as Slavoj Zizek tells us, we don’t dare bring to consciousness, the “unknown known.”  Kollwitz helps us see it.  What we do after that – I have no idea.  But still, it feels good to say “Yes! – this is how it is! ”

Käthe Kollwitz– you belong to “us” too – the art makers and lovers of THIS century.  Welcome.

Later on I went to visit mixed media artist Idee German in her Manhattan  apartment.  She shared with me selections from her series in progress:  small boxed collages that address the economy specifically and the Bernie Madoff scandal in parti

cular.  “I call it TOXIC INVESTMENTS.,” she said.  “You think you know where you’re going in them, but you don’t.”

German – who is neither nationally nor ethnically German – has some made horrid little offerings:  fish swim over a beaded map towards the Devil’s Triangle of Madoff’s Manhattan, while in other pieces, abstract and skeletal skyscraper architectures loom over shadow-silhouette-ghosts.  What is that brickwork on the buildings?  Dollar bills?  Stock holdings?  Her shadow-box collages – many with lids – suggest the ways in which we compartmentalize suffering, miniaturize it, and hide it away.  But the poisonous packages look like presents and consequently MUST be opened.  When we do open them, we see ourselves in those indistinct shadows, recognize our foreclosures in the burnt out buildings: the (Sub)urban wreck of our “holdings”.  For this reason, the boxes are oddly comforting: the landscape of the Great Recession proves to be not “great” at all; it’s tiny, and somehow the disaster is reduced to a more manageable size.   We can literally take German’s boxes in our hands, and thereby get a hold on what has happened to us.  Maybe. If, we can learn from our mistakes.

Idee German belongs to” us” too : an inheritor of the European avant-garde, she connects with the grotesquerie of German Expressionism, but adds her contemporary New York Jewish girl sense of the ridiculous and the awareness of the subversive power of the small.   Kollwitz would get German’s work.